I Wanted More at 34 but Learned To Thrive at 35

I never thought this post would see the light of day. For over a year I had hoped to write a post entitled, “From Wanting More at 34 to Time to Thrive at 35” on my birthday, but there was nothing thriving about it.

My 35th birthday was an escape from all the doom and gloom around me as I watched as a two thousand pound puppet wreak havoc onstage, breaking free from his captors to climb up to the top of the Empire State Building and beat his chest for one dramatic final act. 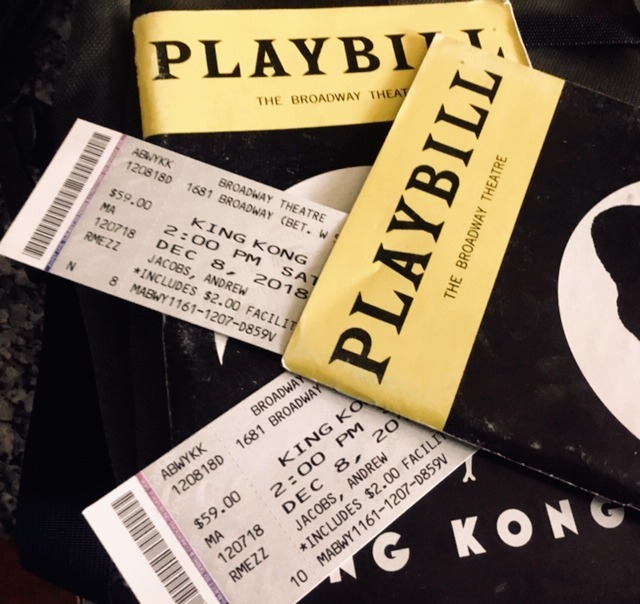 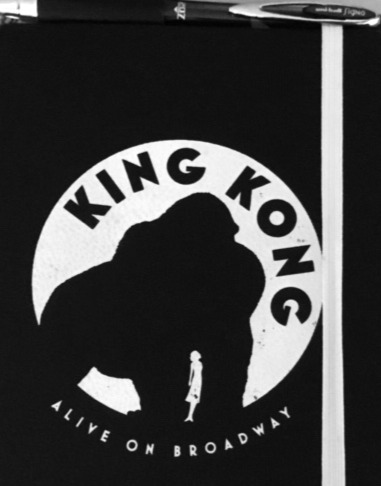 Yes, I saw King Kong on Broadway. And as my husband and I exited the theater, I quickly stopped by the souvenir booth to purchase a journal and christen it with the first quote that came to mind:

"You can’t shackle the unimaginable”

Not only did I dedicate this to the incredible puppeteers that brought this vision to life, I was voicing the last thread of hope I had while dealing with devastation.and uncertainty.

When breaking the news to family and friends that my husband‘s job was sending us to Arizona, I was met with responses that I MUST GO TO SEDONA!!! "It will change your writing forever!”- some would say.

…GREAT, another goal to add on my list of things I SAY I’m going to do - let’s see if I’ll actually DO it. So far, my track record of following through with things hasn’t been solid, this year. But once we settled into our new home, in Scottsdale, my inner sarcasm and self-shaming got a little quieter...Quiet enough for me to acknowledge that it was only a two hours away so why not put it on the list.

Before I continue the story of my experience in Sedona, I must acknowledge what really happened when “Wanting More at 34” ran its course:

"From All of Me at 33 to Wanting More at 34" served as a celebration that came about as I was declaring the rise and return of my voice. And for the first time, I had actually built something that stemmed from its authenticity. And while unpacking boxes in our new apartment and looking back at my 2016 journals, it definitely confirmed that I had a lot more self-awareness towards this trajectory than I ever gave myself credit for in NYC. “All of Me at 33” was solid...But with "Wanting more at 34", I (must confess) didn’t exactly house a structure of what I really wanted that year…

“Wanting More...” What did that mean, exactly?

Beyond the goal of trying to publish one article in Arianna Huffington’s Thrive Global, which happened almost immediately, I was a bit clueless.

On a whim, I created the goal to publish 10 articles by the end of 2018 and it didn't stop there: I also decided that it was time to get my 1st one act play I‘ve ever written off the page and onto the stage. After showing it to a couple of my theatre friends, it was chosen to be workshopped by their theatre company. And in the midst of all that, , I managed to get three more articles published in Thrive Global.

Just when I thought I was heading towards one solid upward trajectory in the world of writing, a surprise had sprung. When walking into a pet store, I came across a volunteer who was caring for rabbits placed for adoption. She was the Editor-in-Chief of the NYC Chapter of House Rabbit’s Society‘s “Thump”. She also happened to be an editor for a for the Wall Street Journal. The hope that my work could be chosen and evaluated by a professional editor from a prestigious newspaper set me on fire. After sending her a story, I was deliriously elated to find out that she liked my writing. When my articles started getting published through her, I honestly didn’t think things could get any better.

I helped organize a successful reunion with friends from my performing arts conservatory years and shared many laughs and fun filled memories these people, who were there for me from the very beginning of my artistic journey. One month later, I was offered the opportunity to direct for an award-winning web series (not a bad way to bring my directorial debut to life.) And what followed almost immediately afterwards, was being offered one of the most compelling roles I’ve ever read for a film. I was cast to be in a strong ensemble of women who lean on each other to rise above abuse, in an objectifying world, that nearly broke them all. In the meantime, the job that paid the bills was stable and gave me more creative freedom to develop new marketing materials from scratch. I couldn’t wait to update my resumes.

Then one by one, everything came crashing down:

A toxic chemical leak destroyed my daily life as I suddenly found myself homeless and having to find a way to sublease an apartment until my husband and I were able to save $12,000 to move into a new one. Once we finally settled into a sublease, a mass production overhaul stalled both my directorial debut and the highly anticipated film. As of today, my directorial debut will more than likely never see the light of day. As for the film, I had to drop out due to creative differences and scheduling conflicts...

Just when I thought things couldn’t get worse…

Two family illnesses came to light, forcing a lot of sudden change. It was getting harder and harder to afford the cost of living in New York City while trying to save money for our own place, again…so much so that once we were out of our sublease, I had to separate from my world in NYC to stay in Pennsylvania with family for a while. Although, my one-act play was successfully workshopped, it had to be shelved due to not having the means to bring it to the stage. Without any creative irons in the fire and feeling more isolated from my artistic community, the four hour round trip commute between Pennsylvania and NYC (to report to my job that paid the bills) became more and more soul sucking each day. Even if I did have SOMETHING going on at that moment, the feeling of not having enough time to commit to the reasons why I moved NYC in the first place was frustrating. And by October, the job that paid the bills restructured its organization and dissolved my role, leaving me jobless.

A month later, things got worse... A third family illness happened, leaving me completely devastated and loathing myself. The week I was suppose purchase the airfare for my husband and me to have our first Christmas with my family was the same week I had lost my job. I decided to cancel our plans due to financial strains from my lack of income. As an adult, I understand being financially responsible seems to be the “right” thing to do...But when it involves not being able to make memories with someone who has been nothing but kind, warm, loving, supportive throughout my life - and, suddenly fearing that I might have just lost my only chance of spending a Christmas with him and my husband in the same room, this financial decision made it very hard to live with myself. Very, very hard.

…And then in December, I turned 35

...Two months later, My husband and I made our first trip to Sedona.

It is easy to see that I was surrounded by history and mystery. I’ve often been told that Sedona was a very spiritual place and I can confirm there is something...something here. From the dry red rock mountains that hold many ruins in the Boynton Vortex to the sudden transition into a forest-like atmosphere along Slide Rock State Park - electrifying energy is constantly present in this place.

Since that first trip, we try to go back as much as we can...I don’t know if my writing has changed, but the environment continuously provides deeper perspective on how powerful the truth can be. Through my first hike in Boynton Canyon, it hit me that both the good and the bad times served a meaningful purpose over the last year.

And in the midst of crossing Sedona off my list, two insights made their presence known:

1) I need to stop beating myself up

...Because whenever I say I’m going reach a goal, it has a tendency to happen regardless of the obstacles and delays. But throughout my journey, for as long as I can remember, I’ve felt this need to place mounting pressure on myself to make sure I achieve goals within my expectations… Whenever I fell short, I’d take a sledgehammer to my self-esteem, smashing it into smithereens.

For some odd reason, in Sedona, I was faced to ask myself the question for the first time: Why?

Why do I feel the need to do this?

This confrontational yet nurturing realm forced me to take an even harder look at my patterns:

…When I say I’m going to do something, it never came without the baggage of self-doubt.

Ultimately, I am my worst enemy…I wonder if there’s a cure for that.

That trip became more than just a checked item off my list. I can bask in nature‘s liberation of me from me. In this newfound place of peace, I am compelled to give the sledgehammer a rest and, with growing ease, learn to trust my visions: Whatever I choose to do, it will either happen or I will become it. History has proven this to be fact.

Putting energy out there in the Universe the day I turned 34 was based upon a need to use the year as a launch pad for “greatness” ...by only involving euphoric highs. Little did I know, I was about to take on quite a bit more than I bargained for and didn’t quite realize or even understand that the growth (needed) can sometimes stem from great discomfort.

While planning multiple trips back to Sedona another insight came to me: Sedona gave me the freedom to ask: What if?

What if struggle, frustration, feelings of defeat were all colorful ribbons wrapped around this gift?

What if that gift was wrapped in paper made with pain?

And what if I untie the ribbons, tear open the paper to find that the gift is wisdom?

What if I needed all of that to get me here – a place, I never imagined existed, that would give me my inner peace?

Looking back at what all my 34th year had in store, I guess it is easy to say that the title “From Wanting More at 34 to Time to Thrive at 35” was not exactly realistic. How does anyone know when it’s “Time to Thrive”? What I will say is that my learning is a journey and “Learning to Thrive at 35” (I now see) has been an ongoing process since the day I spent my birthday with King Kong.

Again, I don’t know if Sedona changed my writing forever, but what I do know is that getting out of the dangerous summer heat of Scottsdale, I had the freedom to roam outdoors in this majestic oasis. Through that freedom, I’ve realized that there is so much more to discover. At one adventure’s end, a new journey begins. Yes, I have managed to do a lot in my life, but not without the twists and turns from the challenges that kept me growing to get here. A growth that continues to build confidence and curiosity as I channel my focus to the next thing on my list. Yes, I’ve come to realize that going after every goal tends to be met with setbacks and obstacles, however there's been a number of them that I've managed to make happen...plenty enough for me in my to believe...

"You can't shackle the unimaginable"